About one month ago I posted an initial design for the new responsive website page header. Here's how the mobile version looked:

At the time I said I would like change this to place the "branding" and the "Menu" button on the same line but I hadn't worked out how to do it. I've pretty much sorted it now, so here's the revised version:

I'm happier with this version since it takes up a lot less vetical space. I'd also decided against using the "hamburger" icon on its own to represent the menu - in the first version I simply used "MENU" instead as being understandable by everyone. In the later version I've appended the hamburger icon to the text.

The appearance of the header on larger tablets and laptops / desktops has been altered very little. There's just a change to the "home" and "search" icons (I'm now using Font Awesome instead of GlyphIcons) and the serif font used for the strapline has changed. Here's the first version:

And here's the revised version (spot the difference!):

As before comments are more than welcome.

Posted by Delphidabbler at 11:47 pm 4 comments:

After having mocked up the branding (i.e. page header) for the new website I've now turned my attention to content.

After looking at some designs I like around the web I've come up with the following look and feel for the site's software pages. The mock-up is for one of my applications, but I'm considering using the same style for Delphi library projects.

Here's the 1st draft of the design as it displays on larger tablets and desktops: 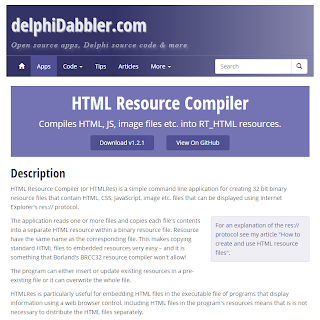 And here's how it appears on mobiles or small tablets: 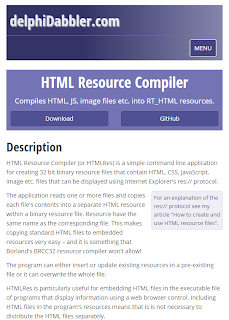 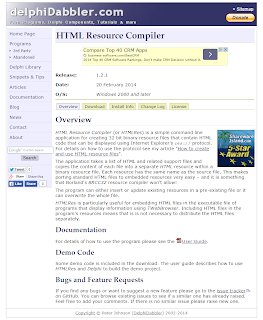 What do you think? Any comments are welcome.

Posted by Delphidabbler at 2:33 am 2 comments:

Any contributions towards the costs of the web site are welcome.