Showing posts from 2020
Show All

Time to start on a new application, but what? 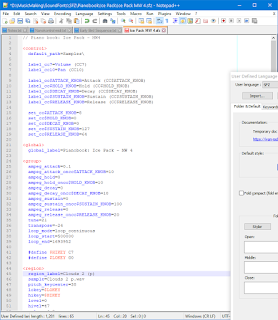 It's been years since I started to develop a new application in Delphi and it's about time I did - I'm feeling the need for an injection of enthusiasm that simply maintaining old code doesn't provide. Now, love making music, so I guess that's the way this application is headed. There are a couple of possibilities that I'm considering. A tool to help generate .sfz open sampler format files used by samplers such as Sforzando . Those little beasts are pigs to code by hand and the few existing tools don't meet my needs. Because this is a coding blog, I guess I ought to show some SFZ code: I'm curious about generating music from mathmetical sequences (yes, really). I suppose this appeals to me because I'm both a maths graduate and an amateur musician The apps on the net I've come across aren't very musical or aren't intuitive to use. Maybe I should have a crack at something like that. To give you an idea
2 comments
Read more

October 31, 2020
The System Information Unit has received a minor update to the TPJOSInfo class to enable detection of the newly released Windows 10 October 2020 update (now officially version 20H2 ). I've not been able to test this new code because I haven't updated my copy of Windows 10 yet. However the code uses the same method of detection as is known to work for other Windows 10 updates, so all should be well. Please let me know in the comments if something's broken. Get the latest version from SourceForge at  https://sourceforge.net/projects/ddablib/files/sysinfo/
Post a comment
Read more

September 13, 2020
A potential vulnerability has been detected in CodeSnip that affects all versions up to and including v4.17.1. This has been fixed in the newly released v4.17.2. Updating is strongly advised. More details and download links over on the CodeSnip blog .
Post a comment
Read more

July 16, 2020
Thought it was about time the old blog got a bit of a dusting off and was brought screaming into 2020, or 2015 at the least. I chose the new theme to be mobile friendly, because the old one wasn't. Other than making it look similar in colour to DelphiDabbler.com, and tweaking a few fonts, it's pretty much a standard Blogger template. I'm sure I'll get to know if people hate it!!
4 comments
Read more 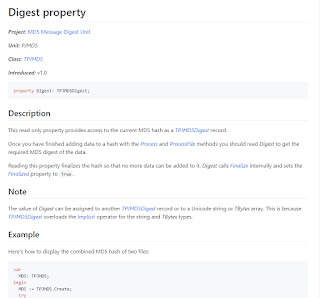 July 08, 2020
Google have told me that several really old links to pages on DelphiDabbler.com are still in use and have been causing 404 errors on the new site. The old site had redirected them to newer URLs, but despite returning the correct "moved permanently" HTTP status codes, many decade old links have persisted. I've managed to put redirects in place for some of them, but some have defeated me. Still, most of the old links now take users somewhere sensible!
Post a comment
Read more

July 08, 2020
It's been a bit of a slog, but the documentation for the DelphiDabbler Console Application Runner classes has at last been ported to the delphidabbler/ddab-lib-docs repo on GitHub. There are lots of examples of how to use the classes in the docs. View the docs
2 comments
Read more

The Tips Are Back (sort of) 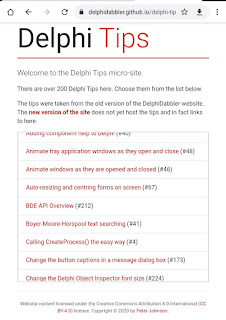 The Delphi Tips  section of the old site didn't survive the redesign and move to the new host. I moved the the tips onto GitHub to prevent them from being lost. Well, now they're back, after a fashion. Not delphidabbler.com just yet, but as a GitHub pages micro-site. Check it out at https://delphidabbler.github.io/delphi-tips . There's no search as yet, but all 234 tips are there. I do intend to reintegrate the site into delphidabbler.com one day, but given how much needs doing with the new site, who knows when that'll be. So if anyone wants to improve the micro site, please fork delphidabbler/delphi-tips and code away!
3 comments
Read more

Been and gone and moved! 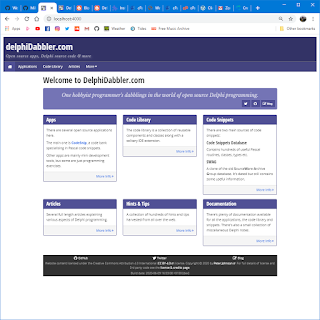 Well that was a long haul! I have just updated the delphidabbler.com nameservers to point at the new site So now we wait a few hours for everything to propagate across the net and we're live on the new site. And then we find out what broke in transition from the development server to the new production server! So what's different? A hell of a lot! This is a ground up rewrite. The site now plays nicely with phones and tablets. Apart from www all the sub-domains have gone: no more snippets.delphidabbler.com, codesnip.delphidabbler.com, swag.delphidabbler.com or wiki.delphidabbler.com Not all articles have made the move yet - they will do but it's time consuming. There are PDFs for the missing ones, for now. The third party applications have gone. Much stuff has been moved elsewhere. Some may be brought back, but much of it lives in a GitHub project somewhere. Browse my GitHub account at https://github.com/delphidabbler . The news feeds have gone The new site finally
5 comments
Read more

June 07, 2020
The new web server for delphidabbler.com is up and running and just waiting for me to point the name servers at it I'm doing that on 9 June. So, the new site should start to replace the old one over the following couple of days as the change propagates across the net. Please refresh your browser's cache if the new site doesn't show up. Note that the old server closes down sometime on 14 or 15 June, so if the new site does not appear by then, keep force-refreshing your browser. As I've mentioned before, quite a bit of the old site's content will not be moved over - there's just not been time. The web apps may make a re-appearance in the future, but for now they're gone. Much of the info that does not make it onto the new site has been moved into various GitHub repositories so the data is not lost. At long last the site is getting https enabled - the old server prohibited this but the new one allows it.
Post a comment
Read more

May 31, 2020
The long-promised version 4.16.0 of CodeSnip has been released. This important release removes the program's dependency on delphidabbler.com web services. See the CodeSnip Blog for details.
Post a comment
Read more

May 26, 2020
I've just released the DelphiDabbler edition of the old 1997 SWAG collection of Pascal source code and programming examples. What's SWAG? Here's what the original maintainer of the collection said about it: "SWAG is a collection of source code and program examples for the Pascal programming language. The material has been donated by various Pascal programmers from around the world who desire to contribute to the advancement of one of the greatest programming languages there is. SWAG packets are available in 57 [sic: now 60] different categories covering EVERY aspect of the Pascal language and ALL ABSOLUTELY FREE! The material contained in SWAG is intended to be a teaching and learning aid for users of the Pascal language. Whether you are a beginner or experienced programmer, you'll find SWAG to be an invaluable source of ideas and information." Why release it now? There are three main reasons why I've "rescued" SWAG 23 years after it ceased to b
1 comment
Read more

May 20, 2020
Following my previous post where I said that, due to Corona virus, the move to the new web host was postponed, my one and only development laptop died on me a couple of weeks ago. That means that the revised website due to go live in mid June will now have even less content that had hoped. You can see the current state of play at https://delphidabbler.github.io The new machine has arrived now, but it's going to take a couple of days to configure it, restore backups, reinstall all the software and purge all the preloaded crap that I didn't ask for! I've got a to do list as long as my arm, and that includes more than just adding content to the new site. Most of it has to be done before the old web server closes on 15 June. Hey-ho. The old site is fully backed up so the content won't be gone forever. If I had an ounce of belief in mysticism I'd be starting to think this project is jinxed. But I haven't, so I don't!!
2 comments
Read more

May 03, 2020
Trivial as it is compared with everything that's going on right now, I thought I'd give an update about moving the delphidabbler.com website to a new host. The web hosting company that has generously offered to host the site in future is suffering set backs as a consequence of the corona virus. I just hope that the guys at the hosting company are personally keeping well. Consequently I'm not sure if we'll be able to get the site moved before the current hosting agreement ends on 15 June. So it's looking more likely that plan B will need to be activated, if only as a stop gap. Plan B is to point the delphidabbler.com domain at the site currently being developed on GitHub. You can see the current state of play at https://delphidabbler.github.io . We're going to loose a lot of stuff if this happens, but everything is backed up so, if and when it's possible, said stuff can be restored. As I said, keeping a little web site running while people are dying
Post a comment
Read more

March 19, 2020
Well, well, well. Never thought I'd ever release any software again. But I've given the System Information Unit a long overdue update in an attempt to detect all updates of Windows 10 to date, along with Windows Server 2016 and 2019. I've only been able to test for my Windows 10 installation using - the rest of the code is based on research. There's also a new  TPJComputerInfo.ProcessorSpeedMHz method to return the host computer's processor speed. Get the latest version from SourceForge at  https://sourceforge.net/projects/ddablib/files/sysinfo/
5 comments
Read more

DelphiDabbler.com Is No Longer Closing!

March 19, 2020
Stop Press: I'm no longer closing down DelphiDabbler.com! Stop, Stop Press: the site move is happening on 9 June 2020. More Info . A brand new site is under development and I've had a generous offer to host the site. We're still ironing things out, so I'm not making a formal announcement yet, but things are looking very good. Even in the unlikely event the plans don't work out, the new site will still go ahead on GitHub. You can see an early development version of the new site at https://delphidabbler.github.io/ . Finally, do take care of yourselves in these difficult times - stay well
8 comments
Read more

Some Impacts Of Forthcoming Site Closure

January 23, 2020
Update: The site is no longer closing! Some of the changes below may still happen, but the site itself is staying up. See this post for details. Keep an eye on this blog for updates. Now that the 15 June date for closure of DelphiDabbler.com is less than 6 months away I thought it was time to set out some of the implications. Here are the main issues: The wiki at wiki.delphidabbler.com will go away. This means that some documentation, FAQs and various useful notes will be lost. In particular the online help for some of my Delphi Code Library will disappear. Some of the docs have been moved to GitHub , but many haven't. I doubt there will be time to move any more. There may be time to save some FAQs and to GitHub but it can't be guaranteed. The CodeSnip program will loose access to some of the webservices it uses. There's a separate blog post about this. The online version of the Code Snippets Database will be lost. But all the code should still be available to user
2 comments
Read more
More posts