Today is my birthday, I'm 62 today. I'm British and I'm officially a grumpy old man. So am I allowed a little birthday rant? My topic:

The failure of software developers to internationalise dates irritates much, much more than it probably should!

On the increasingly rare occasions they send me cheques they're in pounds, not dollars. So why are they still getting the date format wrong for most of the bloody world?

Sadly Google are not alone. Some British companies get this wrong too, which is even worse.

Here's a list of the countries and the date formats they use. This is according to the gods of Wikipedia (so it must be right!) 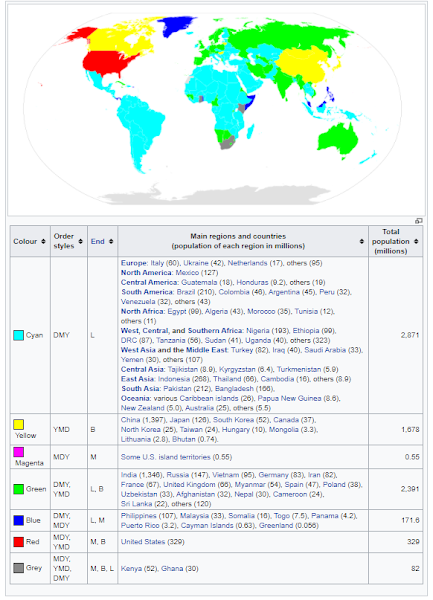 M/D/Y isn't that popular is it?

Notice the token Delphi reference to justify this post being on this blog?

Now I love amd admire our American cousins, and I find the differences in the way we say 'solder', 'herb', 'Delphie / Delpheye' and 'aluminium' rather charming. But come on guys, get the bloody dates right. It is, after all 2021, not 1981 (in some of the world).

And to anyone who says my British ancestors started it by saying 'the 3rd of January' I've two responses:

I feel better for that. Here come the comments...

Oh, and happy 1st of March.

Thomas Mueller said…
Couldn't you have used a standardized date format as an example:

If you continue to use a format with slashes you will never be sure whether it's the reasonably sane British format or the brain dead American format.

My dream is that all software developers should switch to ISO 8601 and refuse to let their programs accept and show anything else. After maybe a century of that, the other formats would be dead.
10:43 am

Delphidabbler said…
I'll sign up to that, we just need to convince the rest of the planet!

I always use yyyy-mm-dd myself in file names because it sorts properly using standard alphanumeric sorting!

BillSTP said…
Happy Birthday and welcome to the Grumpy Old Man Club (I turned 66 2 months ago and I feel your pain).

I agree, the time/date standards internationally can be confusing. Makes me think of the fact that America still officially uses Imperial measurements. Always thought it would be nice to just make the switch to Metric and get it over with.
12:05 am

Delphidabbler said…
Thx for the welcome!

I must admit to finding it strange that the US clings to imperial. It's so stubborn and obtuse and so like the British! Of course here in Britain we continue to dither and use both systems. Metric is just too European for many. Some people get very upset about metrification - don't think they like the idea of it being a French system!

I've made the change to metric because it's more logical and a lot of the world went that way, but I still visualise sizes in miles, yards, feet and inches - and weights in stones and pounds - age thing possibly.

October 31, 2020
The System Information Unit has received a minor update to the TPJOSInfo class to enable detection of the newly released Windows 10 October 2020 update (now officially version 20H2 ). I've not been able to test this new code because I haven't updated my copy of Windows 10 yet. However the code uses the same method of detection as is known to work for other Windows 10 updates, so all should be well. Please let me know in the comments if something's broken. Get the latest version from SourceForge at  https://sourceforge.net/projects/ddablib/files/sysinfo/
Read more