More like I forgot about the program for half a decade until I needed it again!

PasHi is a command line Pascal syntax highlighter and it's accompanied by a separate GUI front end program. 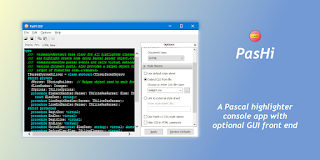 The mode I use it in most of the time is to highlight code placed on the clipboard and write the result back to the clipboard. I mainly write HTML code fragments that can be pasted into an HTML4, 5 or XHTML documents. Occasionally I use it to write complete HTML files.

The project is on GitHub as delphidabbler/pashi and the program installer for the latest release is also on GitHub as Release 2.1.0.

Some Features of the Upcoming Delphi 11 (probably)

Before we start, please note that I'm discussing, by special permission, a pre-release product that is subject to change. (Image used by permission) So here's a brief list of what we can (hopefully) expect in Delphi/C++ Builder/RAD Studio 11: High DPI support in the IDE. Design time previews of VCL styles. An improved rich edit control in the VCL - I'm looking forward to that one! Native ARM compilation for Delphi on Macs. An Edge Chromium powered web browser control for FMX. If you want to know more then you can register for a sneak preview event  on 9th September.
Read more