And it's getting nich-er-er-er by the day as Internet Explorer dies a slow death.

Well, HTMLRes compiles individual files files into a single 32 bit resource file, with the contents of each file being recorded in a separate RT_HTML resource. The resources have the same name as the files.

These resources have two uses:

Big deal - why not use BRCC32 to compile them then? Well, my CodeSnip program uses the approach in point 2 above in parts of its UI, and I include some HTML and image files in RT_HTML resources when CodeSnip is built. To simplify things I name the resources using the names of the files.

And here's the rub: BRCC32 won't (as of Delphi XE, which I still use to compile CodeSnip) allow resource names with dots in them, you know, like file extensions. And so I wrote HTMLRes to do what BRCC32 wouldn't. Simple.

I'm guessing there won't be many downloads of this rather specialised little program, but for completeness I'll just say that I've finally modified it to compile with a Unicode Delphi compiler. Yep, it's that old! That's it, no other significant changes. Previous releases were compiled with the marvellous Delphi 7, so I compiled this version with my oldest Unicode compiler, Delphi XE, to minimise the changes needed. I've checked it with Delphi 11 Alexandria since, and all works fine.

If you're the one other person who finds this program useful, you can download it here.

14 July
Embarcadero have announced the next release of RAD Studio / Delphi / C++ Builder.  It's going to be version 11 rather than the expected v10.5. If you're an existing RAD Studio / Delphi / C++ Builder user and have an active update subscription for then you'll be able to join to the v11 beta program.  The code name for this new release is "Olympus". For full details see Marco Cantu's blog post .
Read more 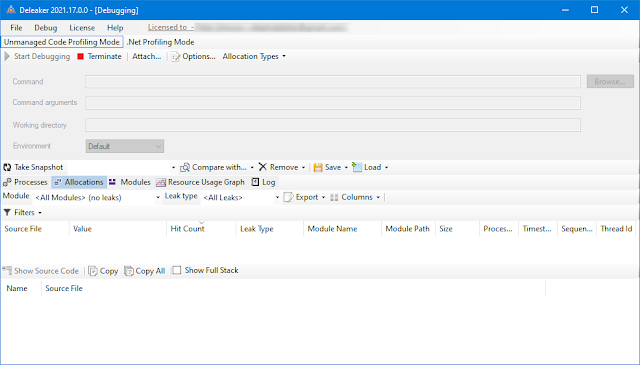 A week or so ago Artem Razin got in touch with me to ask if I'd take a look at his  Deleaker  program and mention it in my blog. I agreed and this blog is about how I've been using it and what I've discovered. This is by no means a definitive account of how to use the program and I'm far from an expert user. For the final word on this program, see the Deleaker docs . You can get a free trial and pricing info from the Deleaker Website . Deleaker stand-alone window Disclosure This is the first blog I've written about a commercial third party program. For the sake of transparency I want to disclose that  I received a free license for this product from Artem, for which I'm grateful. Offer to other developers I'm happy to offer to blog about other useful development software (or Delphi libraries) from other small developers. For more info see my " Promoting Delphi developers & applications? " blog post. So what is it? Deleaker is memory leak detecto
Read more